So I decided to do the Limerick City Hall for this blog. I was in town one day and I decided that the City Hall would be just a good a place as anywhere else for the assignment.

City Hall is located on Merchants Quay in the city right at the bank of the River Shannon. City Hall is where many of the major decisions for the Limerick City Council. They debate over issues concerning the environment and the regeneration of some of Limerick's deprived areas. This building is vital so that all of these decisions can be brought to the peoples attention and hopefully passed in an effort to make Limerick a better place for everybody living in the city and it's surroundings.

I thought the building itself was very modern and it's location within the city makes it easy to access yet out of the way of major traffic flow. This eliminates a heavy build up of road congestion etc. The following are some pictures of me outside the Limerick City Hall. 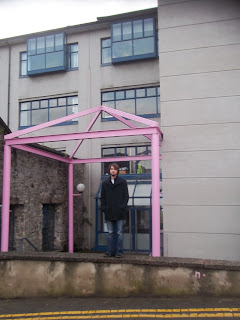 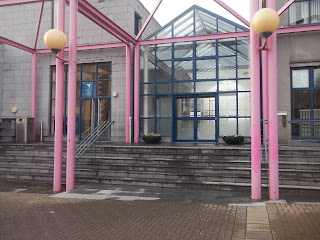 All in all, I found that my trip out to Limerick City Hall was one that has benefited me in many ways.
Posted by Digital Media Design @ UL at 10:36 AM