After searching around the web for a while on different places to go in Limerick I chose to write my blog on the Belltable Arts Centre link as I have a keen interest in Theatre and Drama. On Monday 24th of October I went into The city and went into the Belltable itself and when i got there the receptionist was very student friendly lady and let me look around free of charge. The Arts centre was first first set up in 1981 and at the time was the only regional Arts centre of it's kind around, the centre boast's area for such programme's like theatre, comedy, dance and cinema and runs a wide range of fantastic programmes appealing to people of every genre and age. 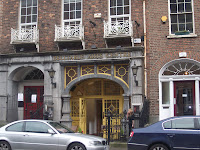 A little Belltable history
As you can see the Belltable was original'y a Georgian house , but prior  to the arts centre being established in 1981, it was first used to produce theatre since the late 70's when it was a local community hall, and prior to this again it was an old opera house during the second world war. I think no. 69 O'Connell street has always been destine to host the arts. The Belltable has been responsible for creating such name's in the arts circuit such as "Island Theatre Company" and the "Fresh Film Festival". 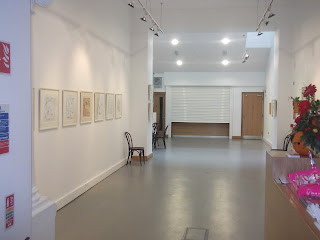 The Belltable boast's a gallery where different artists can put there work up on view for the public and other artist's, also they allow local artist's to put there work up for view and many local people have a made a name for themselves from having gallery's here. The arts centre also has a rehearsal and performance space were many different show's and play's come to tour and perform here throughout the year. There is also a 250 seater cinema here which shows films all year round, although these films are not the latest blockbusters they still tend to draw the crowd in, the next recent screening including details of time and price etc. can found on the link Here if you fancy something a little bit different for a change. As well as all of the above the arts Centre also run different camps and workshops year round for the children and teenagers of the local community details of which can be found Here.


After my extremely enjoyable visit to the Belltable Arts Centre I would advise anybody to go see a show, art exhibition or even a film as it is one of Limericks little hidden gem's, and I would have no problem in recommending it to any one to go check it out.